Eğirdir is a tiny resort island on a beautiful lake, a short drive from Isparta, in Western-Anatolia, Turkey.  The principal activity of islanders and tourists alike is strolling around the small harbor.  It was during our first obligatory stroll that we met Ilknour.  Our paths crossed again a couple days later at the local market and, as we were now friends (casual conversation and/or a cup of tea are apparently the only pre-requisites before Turks consider you a good friend), we made plans for an excursion on her brother’s boat. 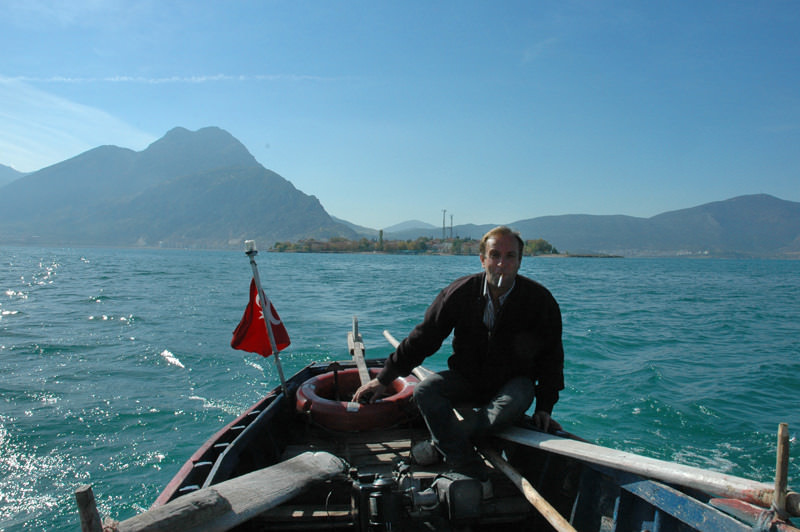 Chatting casually before getting on board, we mentioned our growing desperation to eat something other than kebabs.  The perfectly “grilled to a turn” pieces of meat on steel skewers were headliners on the menus of every restaurant on the island.

Turkish home-cooking is delicious and extremely varied.  Restaurants therefore tend to offer foods that are rarely cooked in private homes - hence the abundance of kebabs. We enthusiastically indulged in beef kebabs, lamb kebabs, mutton kebabs, vegetable kebabs, chicken kebabs, and many other mouth-watering dishes to which the word kebab was attached. We grew to love kebabs, maybe even as much as the Turks. However we were on the look-out for other “Turkish delights” that were not kebab related.  We made it clear that we were really curious about genuine Turkish family home- cooking.

Back from out boat tour, Ilknour told us of the meal that was being prepared for us at that very moment; by her mother, should we be interested.  Of course, we were beyond interested; whatever little pride we had left, after essentially begging for a home-cooked meal, was abandoned as we followed her home like two lost strays.

Upon entering the house, we took off our shoes, as is the custom, and were ushered into a small, extremely orderly living area. Beautiful hand-woven, wool carpets strewn on the floor were a great source of warmth for chilly feet, as well as an absolute pleasure to look at.

Intricately hand-carved, wooden paneling and cupboards crafted by Ilknour’s father, an accomplished carpenter as well as a fisherman, lined the perimeter of the cozy space.

The room, with its wood burning stove and inviting atmosphere, was the heart of the modest house.  Soon, family members began dropping by to greet us.  There was, eventually, a bit of commotion as a small table was set up. A vase containing three dew-dropped, artificial, red roses strategically placed in the center was the ultimate finishing touch on the table before we were invited to take our seats.

Conveniently placed on the wood stove next to us was the Dolmasi (vine leaves stuffed with bulgur) which was immediately served as we settled at our table, set for two.

Out of the kitchen came a soup with tarhana (dried yogurt curds), tomatoes, parsley and small chunks of lamb, followed by a dish of cubed potatoes in a tomato and herb sauce.  Carp baked with lots of onions, a vinegar sauce, assorted spices and herbs was the ultimate tip of the hat to the fishermen in the family (see our recipe). And, as always, sesame flat bread to scoop, dip and wipe whatever the spoons and forks left on the plates.

By this time Ilknour’s entire clan was seated on the couches taking turns encouraging us to eat more, and asking questions about Canada. Her sister-in-law brought out freshly picked, translucent bunches of grapes and apples from their garden and the feasting continued. Copious cups of chai (black Turkish tea), animated conversation, and much picture-taking followed.

In due course, we got ready to leave, stomachs full, arms laden with fruit, and, of course, recipes for all that we had eaten.  Arriving at the gate, we looked back and noticed that Ilknour was following closely behind. “One more thing” she mumbled, her hands out-stretched offering us three dew-dropped, artificial, red roses, before finally waving goodbye.