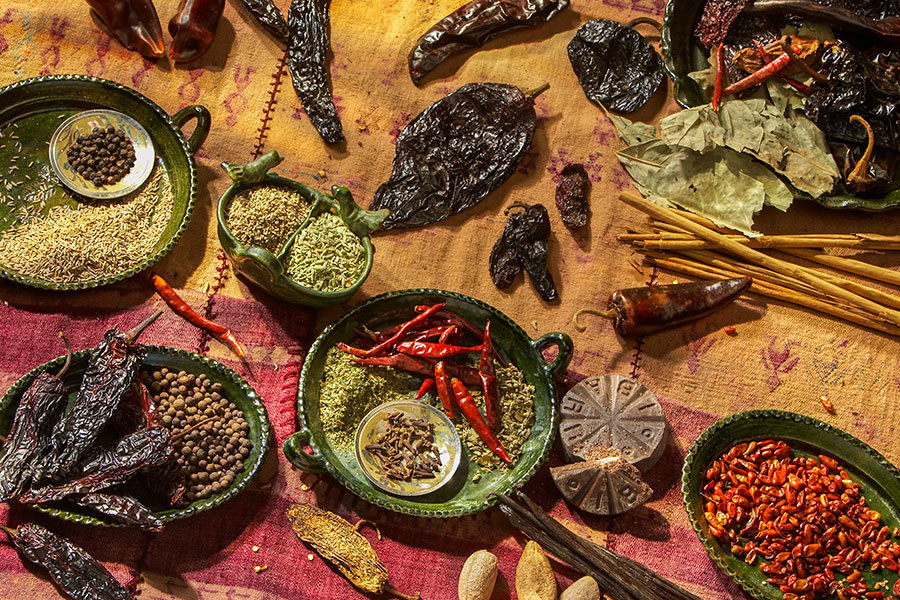 The valley of Oaxaca is found at the junction of the great Sierras which form the central Mexican Plateau. This rich agricultural region has been inhabited for centuries by a great number of people who have long grown corn, beans, tomatoes, and chiles. Situated at the crossroads of commercial routes that connected Central American cultures to those at the heart of Mexico, Oaxaca has given birth to numerous Precolumbian civilizations, whose spectacular ruins still testify to the greatness of many like the Zapotecs and Mixtecs. After la conquista, in the 16th century, the Spanish imposed their culture and religion throughout Mexico. It was probably in Oaxaca that they knew their greatest failure. 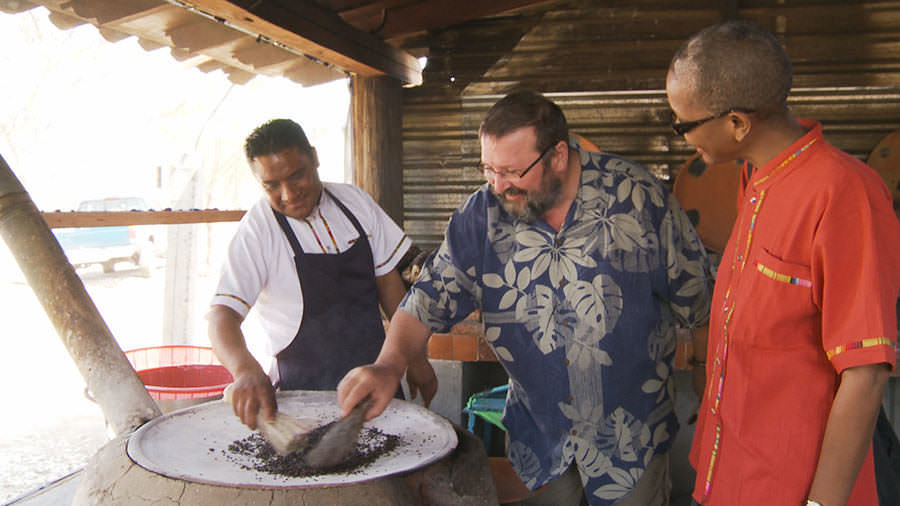 Today, the Oaxaca region is still greatly populated by ethnic minorities, many of whom still carry on the tradition of venturing to different villages, from valley to valley, to join in the fragrant market day exchanges. If you get there early enough, before the town is fully awake, the lucky wayfarer can witness a scene that has changed little over the centuries. As the shop keepers begin to open their stores, valley natives pick a spot on the street and unroll their merchandise: traditional pottery, handmade textiles, and produce grown in the surrounding mountains. While everyone is busy readying themselves, crowds start forming in front of the chocolate sellers, who sell cups of a rich, frothy beverage that always accompanies tamales made with corn and chilies. This breakfast is typical in Oaxaca.

The variety of ingredients offered at the markets is staggering and is particularly notable when it comes to chilies- this region boasts dozens of varieties of chilies in all shapes and colours. 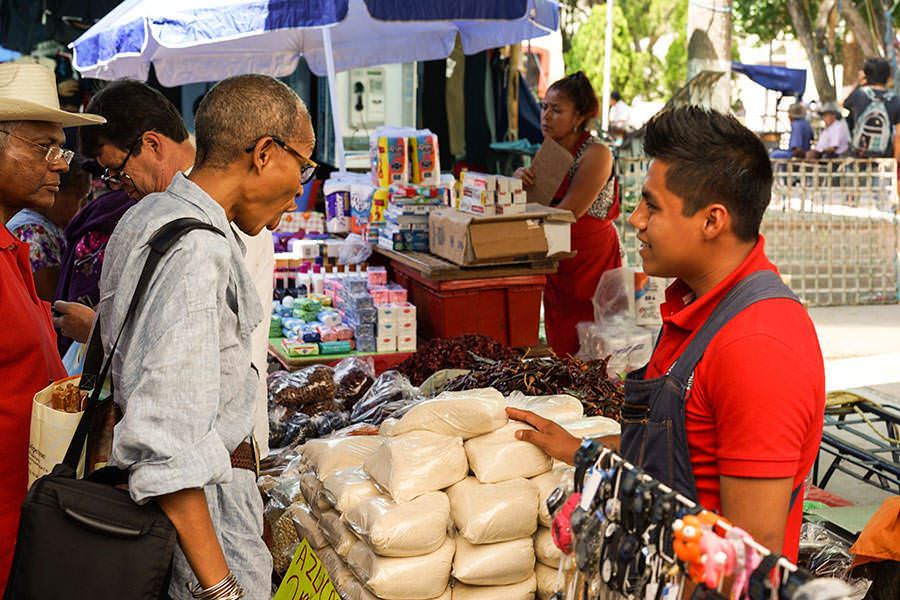 The variety of ingredients offered at the markets is staggering, to the point where a good number of the goods available are unknown in the rest of Mexico. This regional richness is particularly notable when it comes to chilies- this region boasts dozens of varieties of chilies in all shapes and colours. Each type of chile, fresh or dry, presents its own distinct aroma and a taste that can range from sweet to spicy.

There are green moles, with a fresh base, yellow moles, made with yellow chiles, red, which are the most common, or even black moles, which are made with very ripe chiles and chocolate, which are reserved for special occasions.​​ 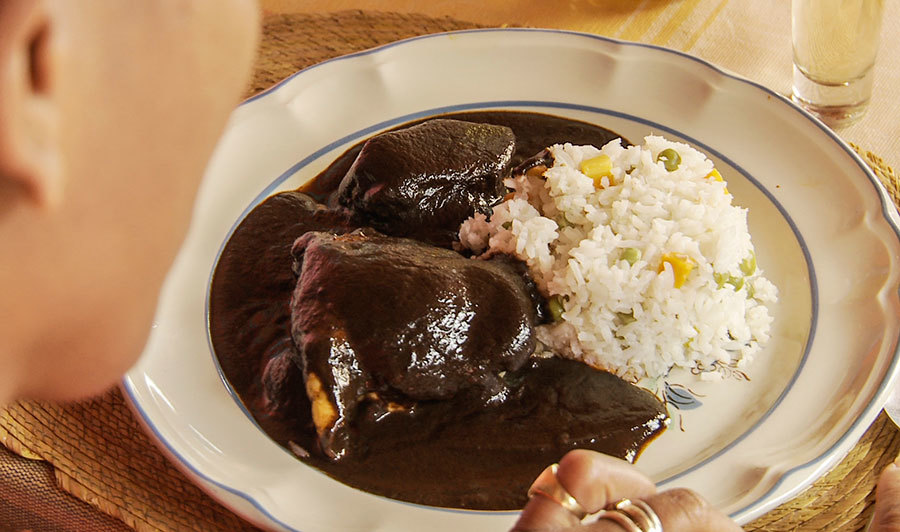 Of course, as is often the case in Mexico, most people prefer the varieties that originate in their part of the country for preparing the innumerable salsas, adobos, and moles that make the reputation of Oaxaqueña cuisine. In Mexico, it’s said that Oaxaca is “the land of seven moles.” In reality, there are way more than seven of these rich, enchantingly fragrant sauces. There are green moles, with a fresh base, yellow moles, made with yellow chiles, red, which are the most common, or even black moles, which are made with very ripe chiles and chocolate, which are reserved for special occasions. 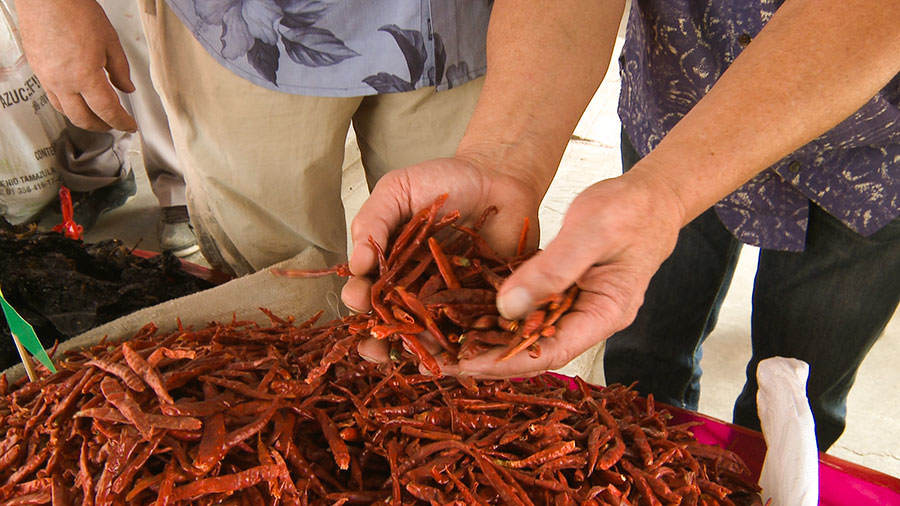 The flavours of this great cuisine are based on chiles, of course, but there are plenty of other dishes that rely on spices and fragrances. If chiles have only been used in other parts of the world for less than 500 years, then they’ve been used in Central Mexico for thousands of years. For real admirers of chiles, it’s without a doubt the best place for discovering all the possibilities that chiles can offer in cooking.