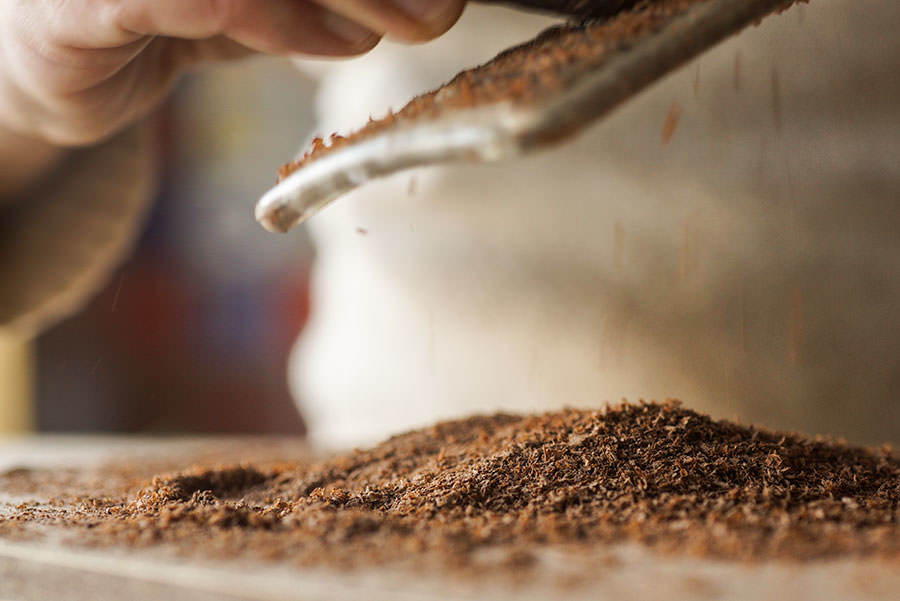 OK, so you’re in the market for a hot chocolate recipe that’s more than just cocoa, water, stir. In many ways, hot chocolate is a victim of its own success: it’s so widely drunk that many hot cocoa fans just aren’t excited by the plain taste of a straight hot chocolate anymore. Even basic hot chocolate recipes feature a few spice twists, like this excellent example from the Guardian. Hot chocolateers have uncovered dozens of recipes to upgrade hot chocolate, starting with that old classic, marshmallows, and building up to hot chocolate’s most exciting proposition, spices. Of course we at Spice Trekkers are advocates of adding spices to your chocolate, which is a tradition that’s regaining popularity amongst even the most jaded of the 21st century’s chocolate- swigging youth. This is particularly true for beverages made with drinking chocolate, the unadulterated dark chocolate that makes for a thick and creamy brew. Here’s a list of the more common spices that can be easily added to hot chocolate that can really make your cold-weather treat shine. 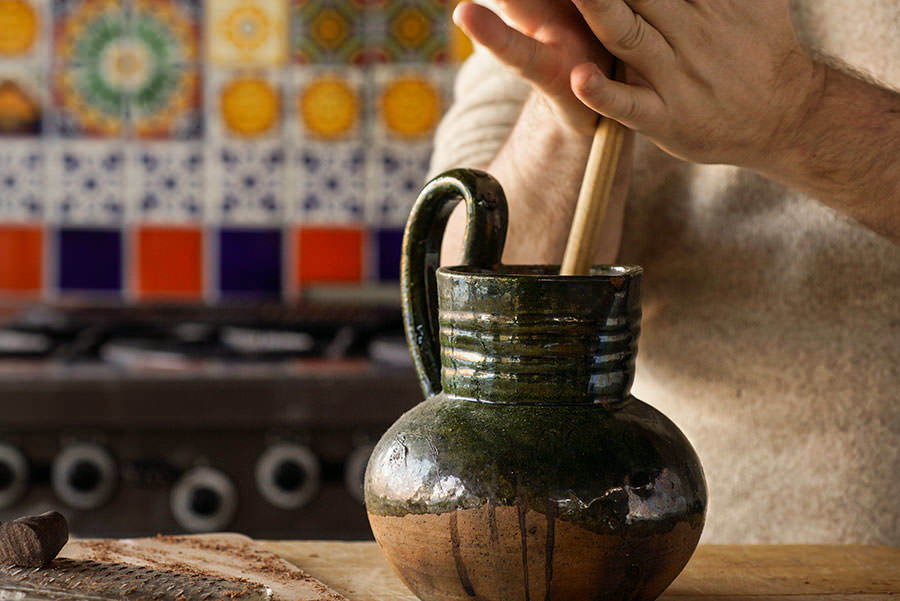 Hot chocolate has historically been made with spices, and has only been drunk in pure chocolate form or mixed with milk for scant decades. Early Mesoamerican hot chocolates were made with chili peppers and sometimes vanilla, which are both native to Central and South America. Archeological evidence suggests that chili was a much more popular addition. The prickly heat of a spicy, Central American pepper can help cut down on the creamy, but sometimes overbearing, thickness of pure melted chocolate. We recommend smoked Chili Pasilla de Oaxaca, which adds heat as well as a smoky undertone.

Vanilla is the other common spice that shares its Mesoamerican roots with chocolate. Early Mesoamericans probably didn’t use the alcohol-based vanilla extract that is commonplace today, but would have mixed in the seeds or added a crushed vanilla pod. These methods are still valid today, but might result in a slightly pulpy texture. A small spoonful of vanilla extract will boost the flavor while keeping the beverage smooth.

Sapote is the seed of a fruit called Mamey sapote which grows in the Caribbean and Mexico. In the West Indies it is generally used for cakes and pastries, whereas in Mexico it is a key ingredient in a cacao-based beverage called Tejate. Sapote can add a layer of depth to the chocolate flavor while its buttery texture can smooth out the mixture as well. This is but one reason for us adding sapote to our Oaxacan-inspired blend for anything chocolate – Oaxacan Spices for chocolate. 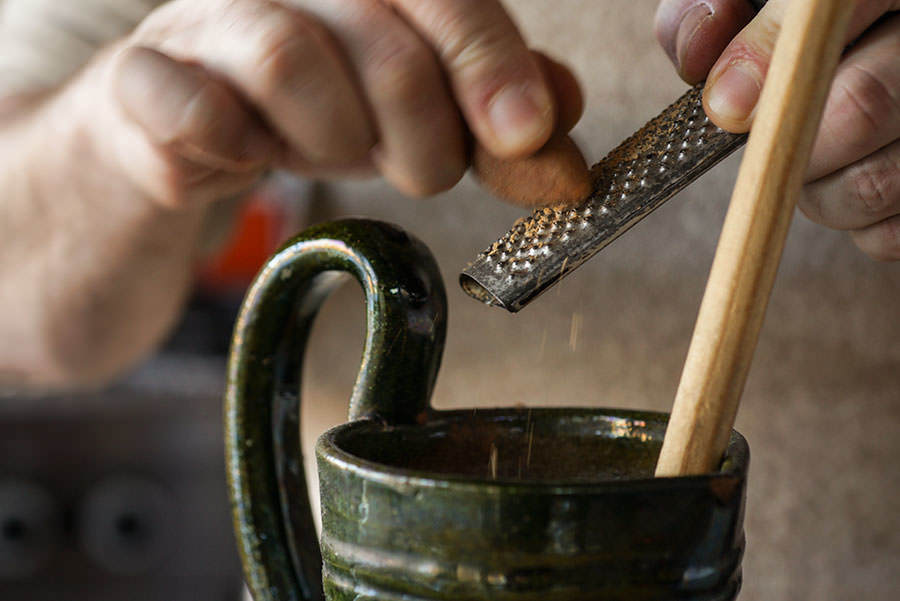 The time has come to expand our search beyond those spices paired with hot chocolate since ancient times. Black pepper may not have chili pepper’s millennia of experience working with chocolate, but its near 500-year history of spicing up hot chocolate makes it a strong candidate nonetheless. Classic black peppercorns are a fine choice. We prefer more aromatic peppers like long pepper or Voatsiperifery when it comes to black peppers in hot chocolate. Chili is still the best way to add pure heat to hot chocolate, and sometimes black pepper ends up feeling like a sad substitute. Take a slightly different angle on adding pepper to hot chocolate and go for something more floral and aromatic. 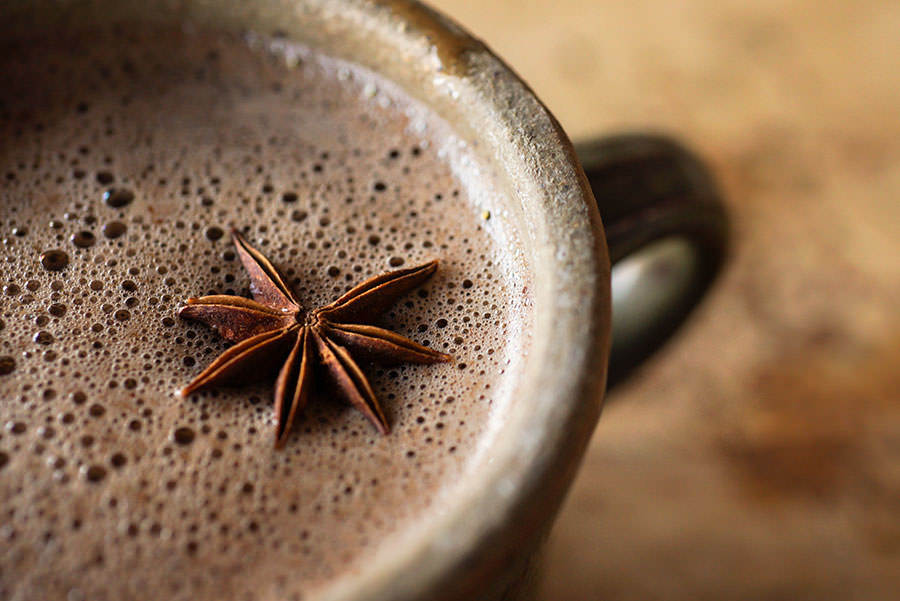 Now we’re getting somewhere! Specifically, Asia. Star anise is most commonly used in East Asian soups and meat dishes, but is becoming more and more popular as a dessert flavoring here in the West. Star anise is much stronger than its European counterpart, and, like clove, should be used sparingly. Its unmistakably sweet take on licorice might add the exact familiar-yet-unfamiliar twist you’re looking for.

Cardamom may not seem like an intuitive addition to hot chocolate, and is lower on a lot of recipe lists. We’re really referring to green cardamom here, which is the sweeter of the cardamom family. While more typically used for curries in Asia, green cardamom has found its way into a great deal of sweets in the west, from ice cream to cookies. It’s already indispensable for many Indian chais and Turkish coffee. It can be used for hot chocolate, too, helping to spike the beverage’s creaminess. 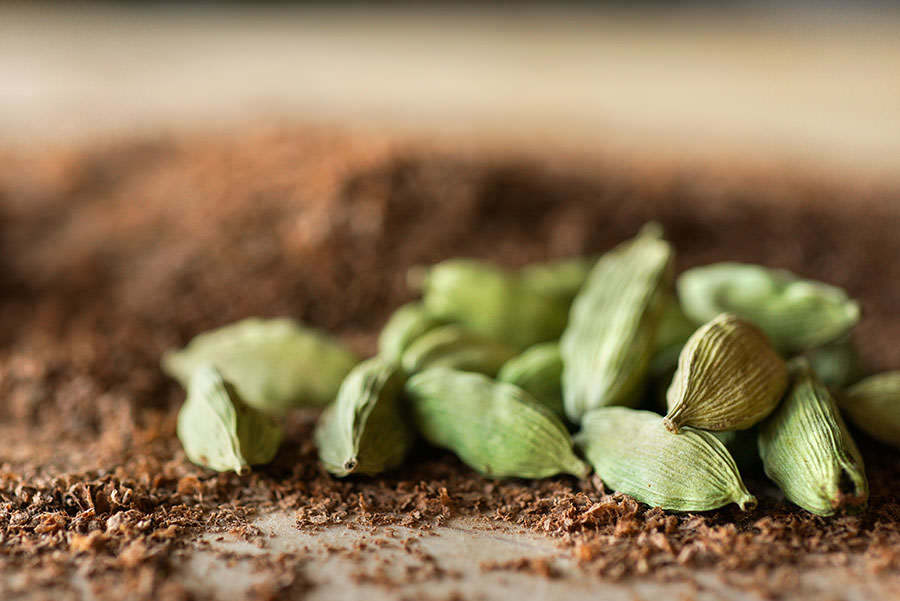 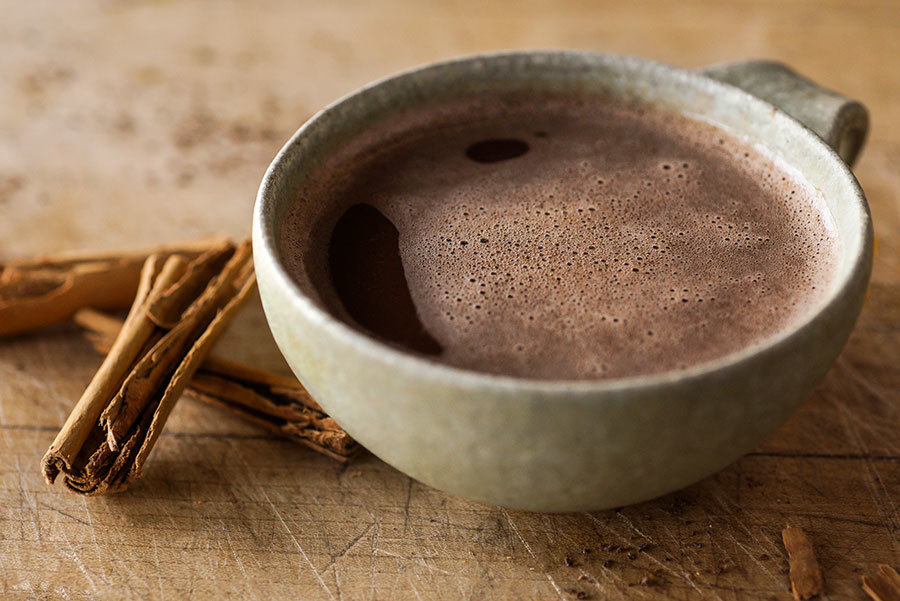 While chili and vanilla and the most traditional spices, cinnamon has long since overtaken them as the most popular. There’s something about the tender bite of true cinnamon that makes it the most worthy alternative to the direct heat that chili presents. Since cinnamon is still meant to offer some spiciness, we recommend a thicker, hotter cinnamon, like our 00 cinnamon, over a finer, more fragrant cinnamon.

While we presented these spices individually, odds are you’re going to use them in some combination. Hot chocolate is a reliable, familiar flavor base that naturally lends itself to experimentation. One option is to put a few of them together and see how they turn out. If sampling different spiced hot chocolates doesn’t sound like the best use of an afternoon, adding some already existing spice blends is another good option. Chai spices immediately come to mind. Our own chai blend is a great choice as well, since its bite is more based on fennel and pepper and less on ginger. This is not to say ginger doesn’t work: gingerbread spices are a fun tweak to traditional hot chocolate, and a good way to use gingerbread spices outside of November and December.

Hot chocolate has been a spiced beverage since its inception. It’s only in the last few decades, really, that the cocoa powder and hot milk or water version has become commonplace. With so many possibilities, rehabilitating spiced hot chocolate may seem like a daunting task. There are, however, a few traditions and time-honored blends that can help point us in the right direction. If you’re really looking to wow the crowd, less well-known spices like sapote, star anise, and cardamom are your best bet.

While traditional hand-crafted, West Indian cocoa is for us the best option, it goes without saying that commercial, powdered cocoa products which are also available could certainly benefit from the addition of flavorful, aromatic spices. There’s just no better accompaniment to a cold winter day than a cup of sweet, spicy hot chocolate.